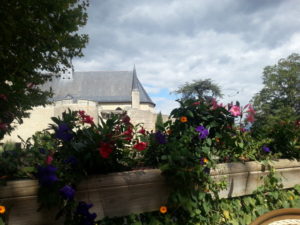 The next trip took Graham and I down through France for a scout around the area south of the Dordogne and then to the Mediterranean for three large markets. We left behind a posse of good humoured charity ride cyclists just off the ferry in St Malo, and made for Montreuil Bellay south of the Loire.

The times I’d passed through here previously had been out of season, with leaves scuttering around chilly café terraces closed for the winter. Today the terrace across from the Chateau was abundant with flowers, and the waitress served us with a smile. We bought sparking pink crémant from the Chateau cellars then drove a few miles to visit Lilianne and Christian in their farmhouse. Christian urged me to look in his barn, piled high with brocante, but first I followed Lilianne into the two rooms that held her stock. A round vigneron’s table that folded flat when not in use was my first purchase. These sturdy tables did good service when workers come in from the vineyards to be fed and watered. With several more purchases popped into the van we sat in their courtyard with coffee before continuing south. 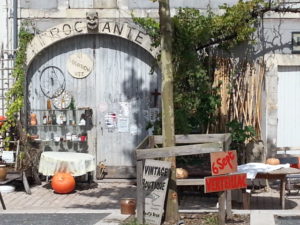 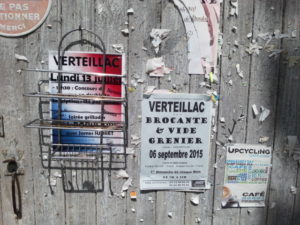 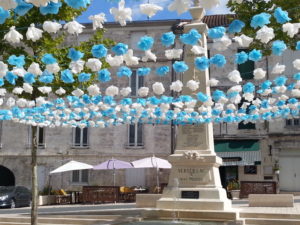 As we drove through a village, all closed for lunch, baking in midday sun and garlanded with alternating blue and white paper flowers for the Fete du Village, I had to stop to photograph a Brocante with a large arched door and eclectic display outside. I became aware of a man standing next to me. We exchanged a few words in French before he revealed that he was the owner of the shop and had just popped back to collect something, but would I like to look inside. “Some people object to my shop front,” he said, “and I thought maybe you were taking a picture in order to complain.” Something in his accent made me speak to him in English – and he told me he had been living in France for many years and running his shop here. I so love chance encounters like this. I bought a charming engraving in a gilt wood frame. 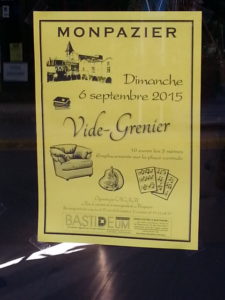 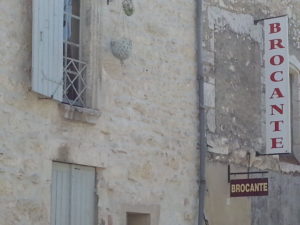 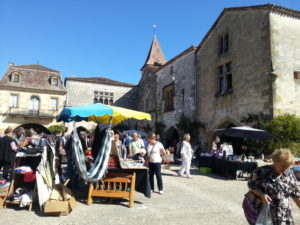 A string of picturesque bastide towns had been built in the Dordogne in the 12th century. I’d noted the vide-greniers that were planned in two of these bastides and, leaving Graham to sleep, I drove out into a blood orange sunrise one Sunday morning. In a dewy sports field outside one of the bastides I found only a few sparse stalls. A tanned and deeply wrinkled woman with a beautiful smile had just set a crate of white plates and bowls on the ground as I walked past. They had done good service over the decades but were beautiful for their wear and scratches. From another woman I bought thick hemp work shirts, made entirely by hand over a hundred years before. Every button hole, reinforced angle and gathering made with tiny, tiny stitching. Lastly, I found a statue of the Virgin Mary minus one hand. “She will bring you good fortune,” smiled the woman.

The dew had dried and the sun was warm when I arrived at the second market. In the beautiful main square with great stone arcades and beamed market hall to one side, people browsed and sat in cafés. How thoroughly uplifting this place was. An elderly couple in one corner were selling a charming selection of jugs and pictures, napkins, finials and so on. As I kept finding more items on their stall and adding them to my growing pile a feeling of abundance crept over me. Madame smiled and squeezed my hand as we said goodbye. All was very well. 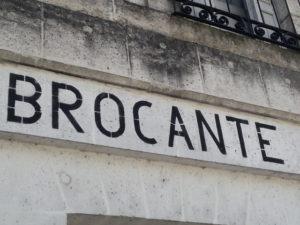 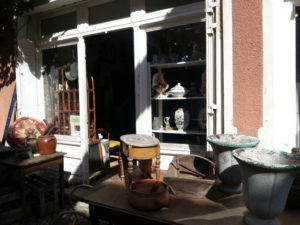 The antiques shop round the corner in a cobbled street was closed but when I rang the owner he said “come tomorrow, I will be there”.

A sign nearby pointed down one of the narrow alleys hung with pots of geraniums to a “Vide Maison”. Here I found a small shady courtyard leading to an open front door. A few women talked softly as they looked through rooms piled with the dishes, pots, pans and possessions of someone’s life. Two men arrived noisily to bring a chest of drawers down the narrow staircase. I found a pretty bottle and a little box. “Deux euros,” said the woman taking my money. When I picked up a length of white fabric and added it to my purchases the price remained two euros. “And don’t forget to go down to the old store, but be careful it is very uneven on the path,” said Madame, pointing across the courtyard to another gate. A fig tree covered most of a small walled plot where livestock would have been brought at night centuries earlier. Here was the litter of many summer’s growth, and a needle-less Christmas tree still in its netting, never brought in for a last celebration. At the far end of the enclosure was the old carriage house/store, dimly lit and crammed with wobbly chairs, crates, bits of engine and galvanized buckets. People bought the odd spanner and wrench. In the bottom of a trunk I found a large bound volume of 19th century Spanish sheet music.

Graham returned with me the following day to visit the antiques shop owned by Olivier, who I’d spoken to. As we browsed, he told us a little of his life and of his plans to marry later in the year. He was a gentle man with thick curly hair and flushed cheeks, who helped carry three large gilt frames to the van, then left us with handshakes and well wishes.