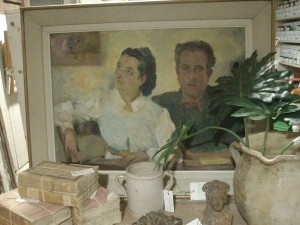 Framed oil on canvas, Nelly Marmorek born Vienna 1877. Self portrait with her husband Oskar who died age 45. Some of her work has been purchased by the National Gallery of Australia.

On the rear has been written (translated): “Nelly Marmorek was artist/painter at Cannes, Villa Molinary, and wifr of Marmorek, modest researcher at the Pasteur Institute. He was fired because he dared to claim there existed forms of acido resistant tubercular bacillus. He was accused of not knowing how to work and of contaminating his cultures. Since then the facts have been demonstrated by numerous other works. Nelly claimed that a statue to her husband had been erected in Vienna.”