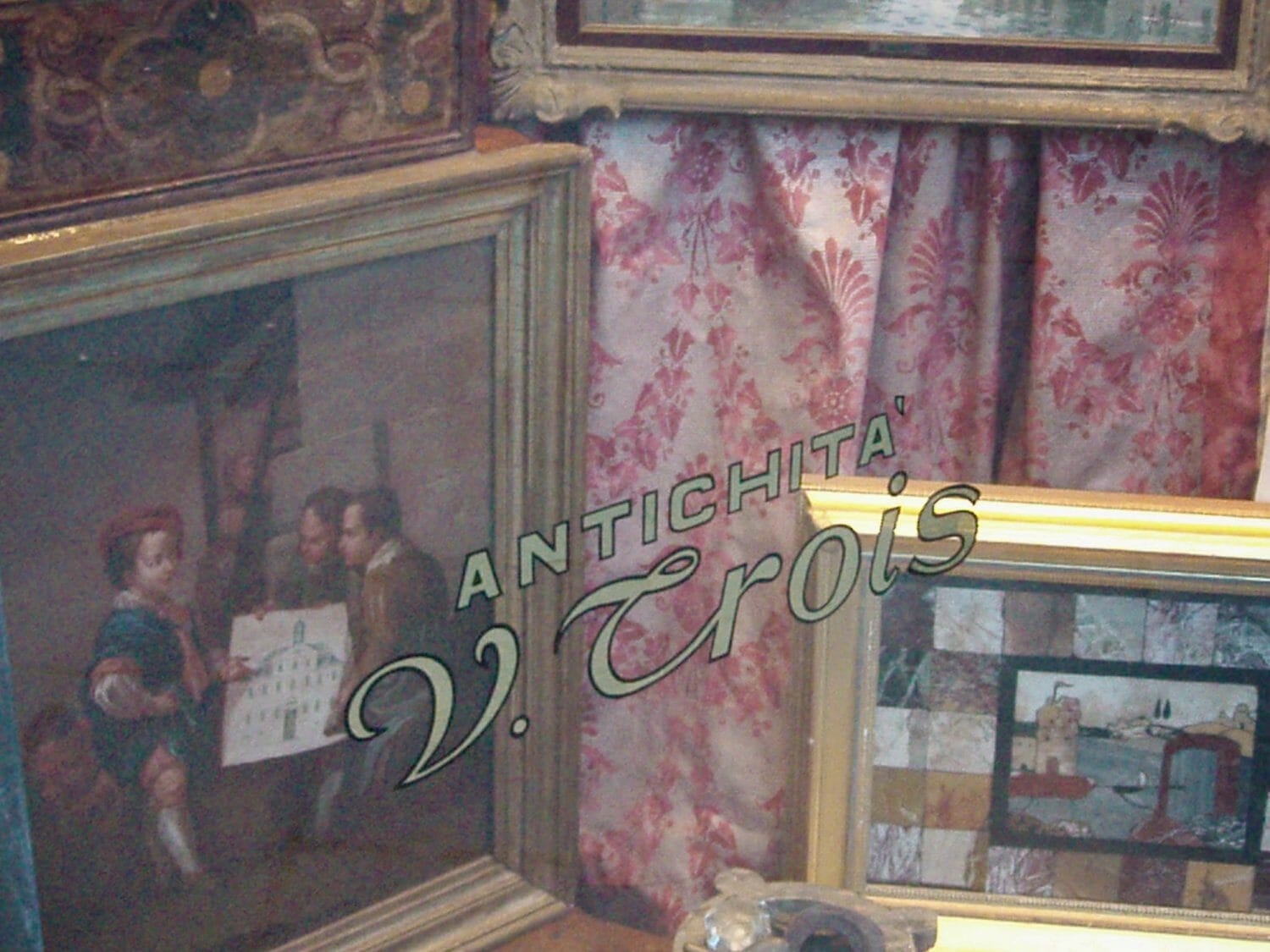 Winter had brought a brief trip to Venice – always utterly beautiful and mysterious. Down one side alley I’d found an antiques shop and lingered, absorbing the atmosphere, touching and looking. Here there was the workshop with pots of rabbit glue and many tools. Fine gold frames waited for restoration. A tawny light filtered in to the low beamed room. Here I bought only a small remnant of grey and gold papier maché décor from a Swiss theatre. The whole theatre had been restored and most of the old décor gone to a dealer in Firenze. In another shop I bought ex-voto hearts, fine silver, cut with cherubs, the letters PGR (Per Grazie Ricevuta) or AM (A Maria) in thanks.

Now winter was long gone and it was time to travel to France. Moe had her nose pressed against the front of the ferry, first down the ramp. It was a bright morning and I took the coast road out of Ouistreham for a change. I had time, places would open at 10h. At 7am saw a pink painted sign indicating “Antiquités Brocante 20 m” and the automatic reflex was to turn the wheel and follow the arrow. Gilli, it’s 7am, even in France they’re not going to open for you! I enjoyed driving through seaside villages, all geraniums and painted white concrete, and at Lagrune sur Mer I buy a delicious buttery croissant for a breakfast looking over Juno beach. The boulangere said the café opened at 7.30am, and there I had a grand crème and bought an armful of Deco magazines.

Further on I saw a sign to Crépon – there was an antiques dealer in the Manoir there. I called her but “Ah, je suis coincée, j’ai un rendezvous a Bayeux”. Do pass by again, she urged. I have many, many things! Little country roads – colza fields, woods, valleys, pale, pale apple blossom in orchards next to weathered silvery grey wood sheds, sun dazzling white on slate roofs. Arriving in Bayeux, a first visit, I travel down the rue des Trois Canons in front of the magnificent cathedral. This could have been the vantage point of a small 1950’s oil painting I had of a cluster of nuns walking down a street with the cathedral behind them. The Depot Vente was open, sparrows cheeping in the cavernous industrial roof. Amongst the alleys of household goods I spotted a few interesting items but, “Ah non, pas de negotiation!” the proprietor said, behind his sliding glass window. There were some good bargains regardless. The old buffet in brown gloss paint with brown patterned sticky-backed plastic on the top was purchased. (I found a nice distressed white and grey finish beneath), and some pretty oil paintings and mirrors. Trade was picking up again, Monsieur said. Some of his American clients were reappearing after 15 months absence.

Further on I had an appointment with a dealer I’d not met before, Jean-Francois. He was normally closed on a Thursday but had said he’d open up for me. On the way I passed a Brocante with a jumble of iron work and wood outside. The owner, with long hair in a pony tail and a generous grey moustache was standing at his door, eating a peach. He raised his hand as I turned off the road. I’d seen him before at one of the fairs at Caen, laconic then, and still so. I don’t bother going to the fairs now, it’s better to stay put, he said. The jumble of furniture continued inside but I found only a dozen thick, heavy absinthe glasses to please. 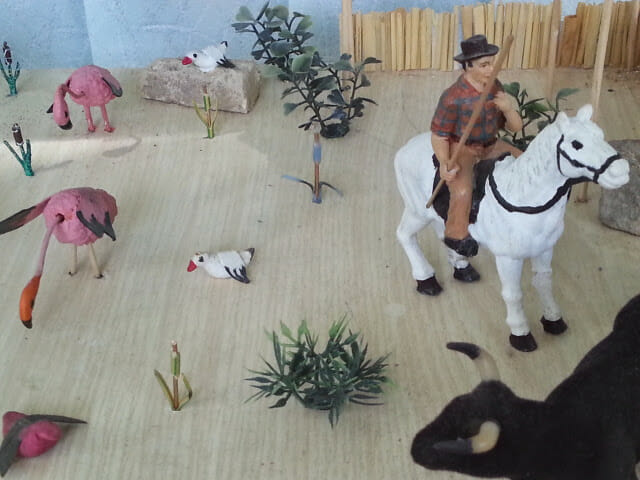 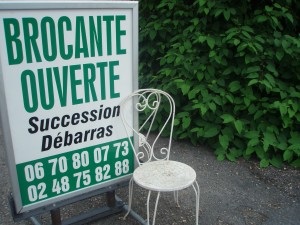 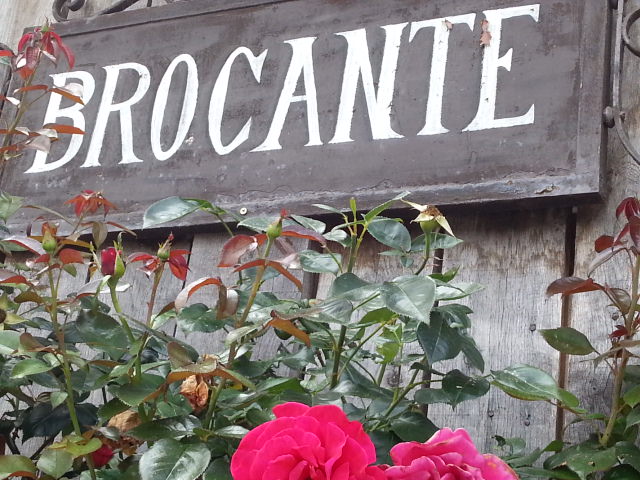 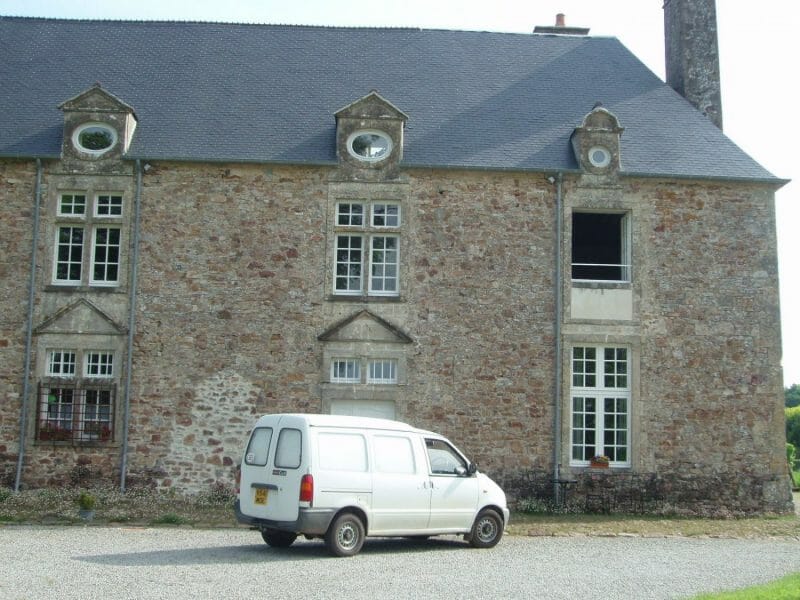