It seemed like a good idea to go to the Paris markets in January. There would be a plentiful supply of stock. Trawling round bleak country lanes, with not a vide grenier on the horizon for weeks had much less appeal. So Graham came too and we took the Newhaven to Dieppe ferry. Cheaper to cross this way. The 1960’s utilitarian concrete ferry terminal in the middle of weed grown railway tracks and freight containers set the scene. Not a latte or cappucino to be had, just an urn of hot water and a catering size tin of instant coffee. A seagull landed on Sylvie’s roof and pattered loudly about above us.

Down then through Haute Normandie, straight roads, meadows and pastures, half timbered houses surrounded by orchards, great log stacks alongside old barns and huge pompoms of mistletoe high up in bare branched trees. At Gisors we crossed the route of an earlier trip, and carried on to arrive in the outskirts of Paris after dark, the Eiffel Tower ahead of us, lit up in gold with its rotating beacon sending a shaft of light around the city.

I’d booked a hotel on one of the wide boulevards that dropped south from the Peripherique that was within walking distance of the lanes and markets of Les Puces at St Ouen. We had the pleasure of dining at Le Coin des Amis, just north of Montmartre – an old dairy shop, its ceiling painted sky blue with puffs of clouds and cast iron columns decorated with leaves.

Friday morning early, leaving Graham to sleep, I went to the large van park by the Porte de Clignancourt to pick up my trolley. Some vans, used as storage for the leather goods stalls on the Boulevard, were battered, ancient and very stationary. There was a light frost and the morning was bright. 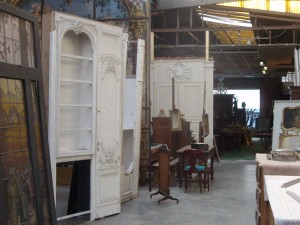 Thursdays and Fridays the markets open from 6am to noon for trade, and at the weekends crowds flock to the place. In one of the trade warehouses, just as they had at my last visit in 2007, dealers stood in their large, dusty, cold pitches, hands in pockets, scrutinising those who ventured in. One dealer who I remembered, tall and looking like Gregory Peck, chatted with me and like everyone I spoke to that day, lamented how slack the market was. “Mais on fait ce qu’on peut,” – but we do what we can.

Would I like to buy a chandelier? Or perhaps this silk cushioned pink fauteuil? Prices were, predictably, high. But I did find some wonderful verre eglomisé glasses there. On to the Jules Vallees market where the atmosphere was more lively and aimiable. It is a large U shaped arcade of small pitches and dealers willing to engage and negotiate.

Four dealers sat around a table engrossed in a game of cards, jovial and bantering. I peered into a stack of chairs and wanted to look closer. “Eh, Philippe, les fauteuils, la dame veut un renseignement, allez, depeche toi!” Philippe reluctantly laid down his hand of cards but came over smiling, with a characteristic sweeping gesture to both sides of his generous moustache. He brought a pair of Provencal chairs out from the pile of tangled furniture. Yes, we both agreed, the chairs had much potential once repainted and re-rushed, and a price was agreed.

A house near Clermont