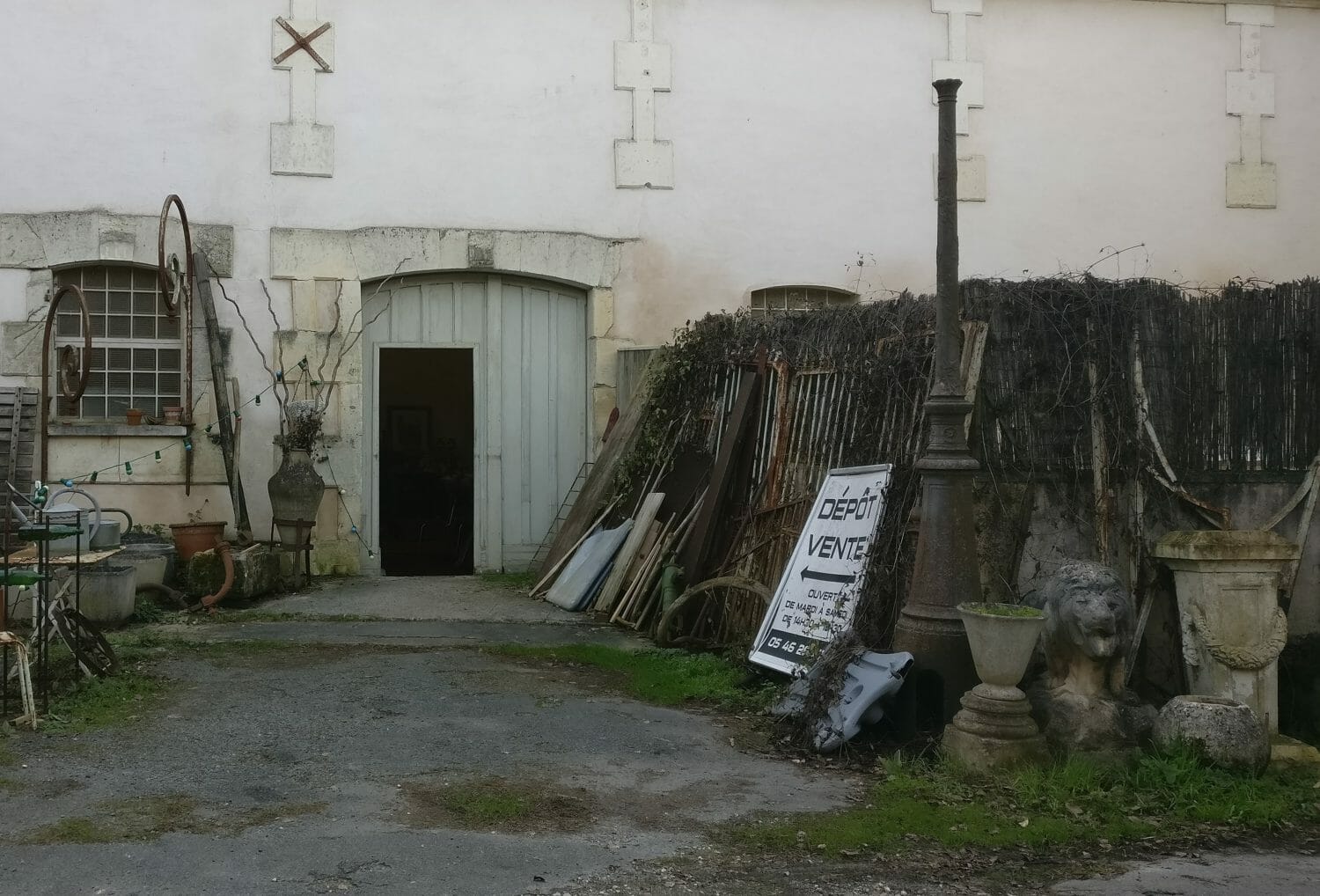 It was decided. This trip to France was going to be a holiday, and we would not be taking the van. The premise (questionable) being that with limited room in the car I’d not be tempted to go buying.  But at the last minute there was a problem with the car – we’d have to take the van after all.  “So, well, maybe I might pop in to one or two dealers then…. but it’s still mostly a holiday….” I said. Graham could, of course, see that any restraint on my part was failing.  I was already browsing online for vide-greniers and dealers to visit.

It was January and frosty.  We’d rented a gite amongst the stark vines and wide open fields of the Charente.  Down from St Malo we drove. Wooded banks, bare branches and high up pompoms of mistletoe. Slanting pale gold shadows, winter coated horses at their hay. Ribboning roads stretching out in front of us.

Exploring the white stone and grey shuttered streets of the nearest town the following day we stumbled, not entirely by chance, upon an interesting Depot.  Through tall ornate iron gates, cream paint flaking, we came into a courtyard pleasingly full of garden furniture once painted white, galvanised tubs still with ice water in them, rusting gates, watering cans and large urns.

To one side was the “Brocante” with a battered tandem bicycle propped up by the door, and to the other side was “Antiquités”.  Two long, high ceilinged and dark beamed hangars with promise.  (Graham took himself off for a walk by the river, promising to return in an hour or so.)

Just inside the door of the antiques hangar stood the proprietor’s desk layered deep with a cornucopia of items, papers and full ashtrays.  Monsieur, deep in conversation on the phone, barely raised an eye as I wandered around.

Another man came over some time later.  We discussed a pair of 19th century chairs, turning them upside down, looking at where they would once have been caned but now were upholstered in a pinky floral silk.  “Il me semble que je vous connais? On s’est surement vu au Mans?” he said.  He did look familiar, and I had most likely bought from him at the Le Mans deballage in the past.  This crisscrossing of paths and random encounters is always a pleasure.

Et le Brexit, he asked? I rolled my eyes.

Three large urns were loaded into Nelly, a tall, heavy mirror and the 19th century chairs.  Back in the shop I looked for the loo.  “C’est la!” was written in big letters on the door.  A plastic watering can under the basin was for flushing.

All loaded and settled, and as we clamber into the van a gruff, parting comment from Monsieur: “You speak good French – some of your compatriots don’t try very hard.” A compliment indeed.

The road to Provence